Fruits of the Nightshade and the Royal Herb

This summer, we got our garden planted a little late and my attitude towards tending our little dirt patch was more Laissez-faire than dedicated care. Stuff did grow. We enjoyed tender lettuces in many a salad and mint in many a cocktail. The Kale had some sort of blight from the start, which I made minimal effort to investigate and fix. I mean, it’s kale. Not something to get too worked up about in my opinion. It will be mixed into my mulch pile later this month and have a second life. C’est la vie. But, the REAL star of every summer garden is always the Tomato. Whether it be Plum or Grape, Roma or Zebra, garden fresh tomatoes smell better, look better and taste better than your average grocery store variety. Just pluck one directly from the vine on a hot day and you will know what I mean. Smell the peppery tomato aroma emanating from the vine, sink your teeth into the fruit and absorb the very essence of the season. Ahhhhh…

This is lovely when you get your plants in the ground early enough and tend to them lovingly throughout a solid two months of sunny days and warm temps. This is Seattle, however, and we get about a month of really nice weather and then there are days like today, when the rain falls and your half-ripe tomatoes sit dejectedly on the vine. Don’t get me wrong, we got a few rounds of ripe, delicious fruits of the nightshade but not the hoped-for haul that we could turn into a delicious sauce to brighten our plates in the dead of winter. This has been noted in my garden journal and next year I hope to do better. 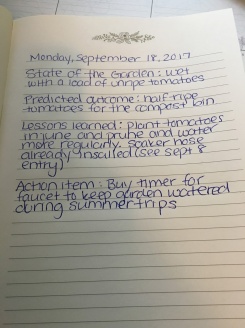 On a happier note, it’s pretty much impossible to screw up another summer staple, basil, or the Royal Herb. Basil can be grown in the garden or in a pot and as long as you keep it well hydrated, it will yield more herb that you will know what to do with. A brief note on watering. Many herbs, like rosemary and thyme (the woody ones, as I like to call them), like to dry out from time to time. They like to be slapped around, told they’ve been bad, neglected a tiny bit. It makes them stronger and more herby. Basil, on the other hand, is a true princeling. He must be kept in moist soil and pruned regularly or he will go chop off Ned Stark’s head or something. But really, the leaves will be dry and narrow rather than round a succulent and he will go to seed all over the place. Ok, I’m done with the weird sex metaphors now, but seriously, if you put a modicum of effort into growing your basil, you will reap the rewards. And that, to me, means pesto pesto pesto! So far I’ve done two mass harvests (where I cut actual stalks, leaving one set of leaves for future growth), eaten two delicious pesto meals and frozen several portions for later. If I play my cards right, I can keep harvesting until it freezes!

Pesto is one of those “no recipe” recipes. Oil, basil, salt, parm and some sort of nut (usually pine nuts) are all that is required. Some people also add garlic and some add lemon juice. It’s all about what you like and what you have around the house…aka the BEST kind of recipe! Toss all your ingredients into a food processor or blender and voila! For my pesto, I drew on recipes from the New York Times, Kitchn, and Simply Recipes. They are all pretty similar and are good to look over to get an idea on proportions. In one batch, I used raw pine nuts and in another, I toasted them. I plan to add some lemon juice to a third and see what that tastes like.

I learned a lot about gardening and the very different requirements for plant care this summer and hopefully, I can bring these lessons to my garden next year so that it is bigger and better. For now, I will be making pesto and coaxing the last of the tomatoes to ripen and to gild a couple more salads before they give up the ghost. 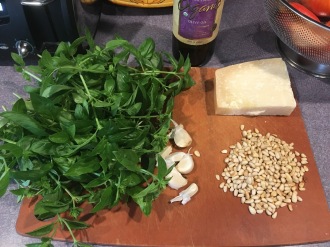 This entry was posted in Uncategorized. Bookmark the permalink.

One response to “Fruits of the Nightshade and the Royal Herb”