Podcasts for what life throws at you

We live in a world fraught with uncertainty, sadness and, well, dirty dishes. Here are some of the podcasts that have helped me navigate it all.

When you have mindless chores to do…

As a neat/clean freak (and currently unemployed person), I end up cleaning the house pretty frequently. It’s not like I’m down there scrubbing the baseboards with a toothbrush or dustbusting behind the fridge…I AM NOT A MONSTER, but I do like to keep things relatively clean and tidy. I find that I am more relaxed and productive in a clean environment and if I space it out into manageable pieces over the course of the week, it doesn’t seem so daunting. Some people like to listen to music while they clean but I generally listen to podcasts. Comedy podcasts are great because they are generally more entertaining than knowledge-packed, so I don’t feel the need to stop and write stuff down for later every three minutes. I also like serialized fiction podcasts because, like audiobooks, you are just listening to a story and, unlike audiobooks, they are broken down into discrete parts, easily consumable over several short sittings. They may even have a recap before each episode. A few “Cleaning Companions” that I recommend are below:

2 Dope Queens – Phoebe Robinson and Jessica Williams are the best friends we all yearn for. They are funny. They know a ton of amazing, hilarious people and they don’t take BS of any kind from anyone. Their podcast consists of them just shooting the shit, hanging out with their friends and having incredible comedians on to do stand-up. They tape their shows in front of an audience in Brooklyn and occasionally travel to other cities. I am seriously considering starting a GoFundMe to bring them here. They are that good.

Homecoming – Homecoming is a psychological thriller of the old-timey radio serial ilk. It has phenomenal voice acting from the likes of Catherine Keener,  David Schwimmer, Amy Sedaris, David Cross and more (Michael Cera was on the last episode I listened to!). There are two full seasons out so far and it is so well done, from the acting to sound editing that you almost feel like you are watching a movie…but you’re not. You are scrubbing some unidentified gunk under the toilet seat. It’s magic! It’s productive escapism!

When you are feeling sad or anxious…

As I mentioned previously, the world can be a sad, uncertain place and we can be sad, uncertain, anxiety attack in the soup aisle having individuals. Sometimes we need to know that we are not alone.

Terrible, Thanks For Asking – Sometimes, the glossy world created by social media and societal expectation, can make it seem like everyone else is doing better than you. I mean, YOU didn’t spend the day apple picking, then curled up by a roaring fire drinking mulled wine. YOU didn’t hike that gorgeous trail (“Eight miles each way!” “Feeling the GOOD kind of tired now as a chicken roasts in the oven and Hendrix on the turntable”). YOU stared at the cat in bed for an hour before moving to the couch to binge on Hemlock Grove. I mean we all have those awesome days every now and then and you can bet that most of us want to get that high from talking about it on social media and getting positive feedback. I am certainly guilty of this, just as I am guilty of the other…(Hemlock Grove…seriously a good show, guys). The point is, we have shitty days and great days and most days are just, meh. It’s the human condition. Terrible Thanks for Asking is a great reminder that everyone else is having those shitty days, weeks, months too. And that is pretty comforting, almost like mulled wine.

The Hilarious World of Depression – Hosted by John Moe, an NPR guy who is depressed and not afraid to talk about it, this podcast also provides an element of “You are not alone” comfort plus a lot of entertaining, intelligent celebrities being brutally honest about their lifelong struggles with depression. Margaret Cho works out to beat depression, Wil Wheaton finds medication most helpful (and for the record is not trying to be cute with that single L. His mother spelled it that way on an early hastilly written note to his father and it stuck). Most of the guests are comedians and all have been through the ringer and come out the other side intact – ish. And that -ish is a perfectly fine state. Don’t let anyone tell you otherwise.

Yes, friends, the holidays are almost upon us. While Summer may have been the time for happy hour margs on the patio, reliving epic camping/beaching/Eclipsing adventures, or (if you live in Washington or Oregon) bitching about the smoke and the latest Trumpian Tweet, Fall and Winter are for more weighty matters. Maybe you have an office party that you would like to win by talking intelligently to your boss for five minutes, allowing you to thoroughly enjoy the shots of high-end Mezcal on the company’s dime mere moments later. Or perhaps you finally want to show your mother that, while you still can’t keep a houseplant alive, you have coherent things to say about gene therapy. Try these on for size:

Waking Up With Sam Harris – Sam Harris is a guy who went to Stanford in the 80s, took MDMA, dropped out, spent 10 years studying consciousness around the world, went back to Stanford, graduated and got a Ph.D. in neuroscience from UCLA.

What, that’s not enough to get you to listen? OK, this is a very smart but chill person who talks about DEEP shit and complex political issues in an approachable way. And he talks about these things with equally smart people. He will say some things that will make you uncomfortable that you may not agree with completely, but he says them in a way that will spark intelligent debate rather than make you run for your bed with visions of acrimonious comment threads seared into your brain.

The TED Radio Hour – There are SO MANY TED talks out there and who has the time to mine them for pithy facts to impress egghead uncle Jeff, your boss, or that barista who reads The Economist on her breaks and is not impressed by your sportsball trivia? NPR has the solution for you. Timely, themed podcasts that combine TED talks plus bonus interviews with the speakers into a neat little package of knowledge. For example, I just learned that playing video games is by definition the opposite of depression! Don’t believe me, check it out here. That’s just the tip of the iceberg of useful facts for life, love, and monetary gain. 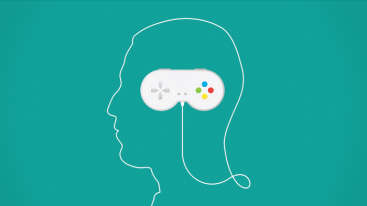 Well, I have lots more of these for you, but I will save them for another time. I hope you are inspired to listen to a podcast or two next time you have a chore to do, are feeling down or want to be inspired!

This entry was posted in Uncategorized. Bookmark the permalink.

One response to “Podcasts for what life throws at you”